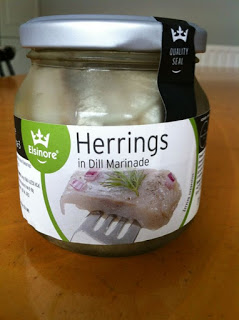 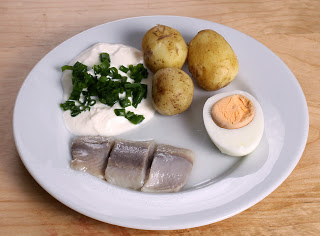 I had originally wanted to call this “The Sashimi of the North” but my erstwhile editor insisted that the fish was not raw, but soused; I could say, on occasion, the same for her.
Those who follow my food journalism will know that I rarely use or buy any pre-prepared food, always preferring to cook or eat food that has been prepared from the raw ingredients. However, I arrived at a friend’s house last week feeling ravenously hungry and needing an instant fix to assuage my prescient hunger pains. She opened the fridge door and pulled out a glass jar of Herring, seeing my lips visibly curling, she insisted I reserve judgement until I try it. I agreed.
Having had a Dutch mother I’ve grown up with this versatile oily fish, but never really enjoyed the roll mops that seem to be eaten by all in Holland, Germany, Poland and all those other countries along the Baltic coast and north to Scandinavia. Pickled herrings have been a staple dish in Northern Europe since the middle ages, being a way to store and transport fish, before the world had refrigeration. The herrings would be prepared, fresh from the trawlers, and then packed in barrels for storage or transportation. I always found the pickling process made the fish too acidic and a little bitter, though my father loved them, especially with a cold beer in the street market of Amersfoort.
I thought I wouldn’t like these, however, with my previously declared love of Japanese food, I’m certainly not squeamish about raw fish, and I was hungry, so I gave these ago.  My god they were spectacularly delicious! These babies were marinated in light vinegar with onions and dill so have a slightly sweeter taste than Roll Mops. They are perfect with with sour cream, chives, potatoes, boiled egg and a couple of slices of rye bread or crackers. Alternatively serve with a rocket and beetroot salad with sour cream mixed with chopped white onions. Always best eaten with a cold beer or, with that wonderful invention of southern Europe, a white wine
This particular brand is stocked by Waitrose, though another I’ve tried is Young’s available from Makro and equally as nutritious, but not a patch on the superior and flavour and texture of Elsinore.
It should be said Herring is exceptionally good for you, being very high in the Omega-3 fatty acids and a source of vitamin D. I doubt I’ll ever be converted to Roll Mops, or kippers for that matter, way too salty, but now I always keep a couple of jars in the fridge for those moments when hunger strikes for a snack or light lunch.
http://www.elsinorefoods.co.uk/
https://www.facebook.com/pages/Elsinore-Foods-Ltd/127616024040486?hc_location=timeline
http://www.waitrose.com/shop/ProductView-10317-10001-49781-Elsinore+herrings+in+dill+marinade