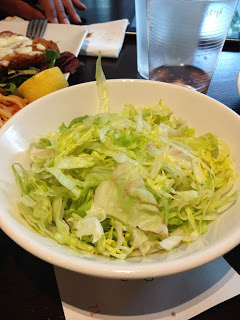 Spectacularly tired iceberg passed off as a side salad 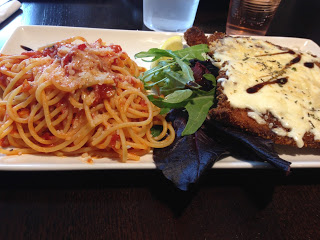 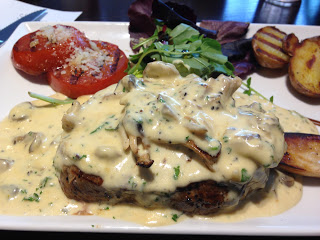 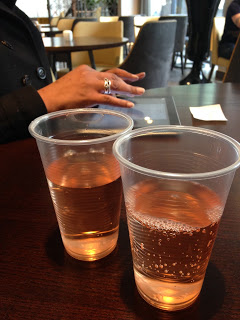 St. George’s hotel passes itself off as a luxury hotel, about which I can neither deny nor confirm.
I can, however, unequivocally say that there is nothing luxurious about eating at La Regina, an Italian restaurant housed in the hotel.

The menu is expensive, (sorry but I’m not going to pay £5.95 for bread and olives) small and a little uninspiring. I was, however, utterly delighted to see that they had a Mirabeau Rose on the menu, an award winning wine from Provence, the vineyards of which are owned by an English couple.
Having ordered a bottle, I was told that we were unable to drink out of glassware due to a football match being staged at Wembley. I had no problem with this news at all. It’s the law, after all. I did, however, think that a ‘luxury’ hotel would provide plastic wine glasses to their customers, rather than plastic beer cups.

At any rate, I fancied a rare fillet steak and my companion the chicken in breadcrumbs served with spaghetti in a tomato sauce. I also asked for a side salad, although it wasn’t on the menu.

Here I must mention that our waitress, who was also serving a bar load of men post football, was an utter delight throughout our meal. I was also allowed to park in the hotel car park which was a complete relief as there’s nowhere to park in Wembley unless you don’t mind paying extortionate fees.

Let’s start with the steak, which I have to say, was extremely generous in size, could not have been more perfectly cooked and came with a very rich, creamy sauce and some fries. A few limp leaves were laid out on the plate, however, and so I asked our waitress to ask the chef for a more interesting side salad. What came back was nothing short of atrocious. Limp, exhausted looking iceberg? Are you kidding? I asked for some tomatoes and cucumber and what came back, as I feared, were those cheap, nasty, watery, waste of space tomatoes that are simply pointless to serve. Another irritation – the vinegar (which came with the oil in separate bottles to help oneself) was so vile it was inedible.

My companion’s chicken was so overcooked on the first attempt, I thought she’d ask for a chisel.
The second offering was better, but the whole plate screamed ‘bland’. The tomato sauce, a staple, uncomplicated affair was just tasteless. The chicken was still pretty dry and the mozzarella on top was chewy and nasty.

The bill, after a ten percent discount (which we didn’t ask for so bravo to the waitress) came to just over £57.

Am I being cynical in thinking that the location of such a hotel means a steady turnover of guests who are attending conferences, going to matches, exhibitions etc and can therefore turn their attention away from giving value for money and proper scrutiny of their ingredients and menu?  I don’t know the answer, I just despair. One look at that salad was enough to put me on anti-depressants.