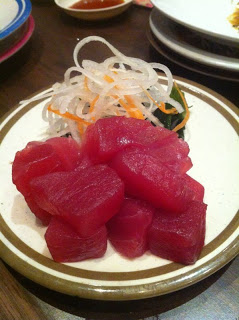 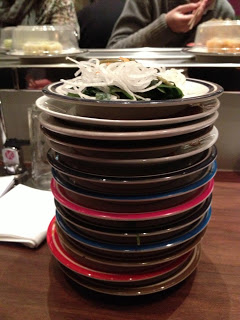 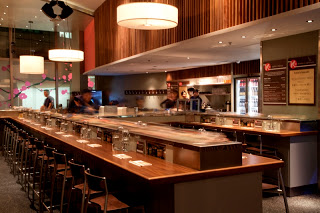 I can’t remember who first introduced me to Japanese food, but I’m damn glad they did. I grew up by the sea, so have always loved seafood with a passion. I used to catch my own mackerel, bream and pollock from the end of the pier, my mother would whip them up into a feast. When I first discovered sushi, there were only a handful of places to eat in London, a small place in Windmill Street, Soho, Sushi Say up in Willesden Green and a hotel in Holland Park with a Japanese Restaurant, the name of which I can no longer remember. Nowadays they are ubiquitous, you can’t turn a corner in the West End without finding one. The quality may vary, but it remains one of my favourite foods, so when I got the call to try the new K10 Restaurant over in Liverpool Street, any attempt at resistance was futile.

K10 is a “kaiten” restaurant, as in conveyer belt, no surprise then that Christopher Kemper cut his culinary teeth working with SimonWoodroffe at Yo Sushi during their start up and early development. Christopher has taken the basic concept added a more sophisticated selection of food and less cafesque and more restaurant feel to this first addition to his expanding chain.

Bursting with enthusiasm and hunger I was the first to arrive with my erstwhile and glamorous colleague from the Londonist, (www.londonist.com)  a good half an hour before our expected arrival. We were warmly and immediately welcomed by Chris and his business partner Maurice Abboudi. Drinks first! Regular readers will know by now that I always start with a beer wherever I’m eating. Rather than have the traditional Japanese beer of Asahi, I opted for Owa ‘Japanese’ Beer,5.5%  www.owabeer.com a dark delicious beer, served ice cold and brewed in Belgium by a Japanese company.

My charming companion for the evening was not only fluent in Japanese; she had lived there for a few years, she was incredibly knowledgeable about Japanese food and so, perfect company for the evening. I thought I knew about Japanese cuisine, but tonight, with her help, my learning curve was vertical. She taught me the best Sake was served cold, not hot, and so ordered the Dewazakura “Oka” 14%, from Yamagata served beautifully in a wooden box on a bed of ice. This lady was not wrong, smooth, delicate and refreshing and a perfect match for the food. I also learned the quality of the sake is proportional to the amount of polishing of the rice, the best sake is made from 55-60% polished rice.

The food on offer is a mixture of traditional Japanese and new creations imaginatively created for a more Western pallet; dishes were joinked off the belt at an alarming speed by my ebullient friend and plonked in front of me with a “You really have to try this.” I was told traditionally one starts with the lightest foods such as sashimi (raw fish) and moves towards the fattier, fried foods like tempura and so on.

The large plate of chunks or raw tuna was not allowed to pass, and, for me, was the best dish, I could have eaten ten plates of that alone if I hadn’t been here for ‘professional’ reasons! The thinly sliced yellow tail and chunks of salmon were equally as good as was seared tuna with toasted sesame and miso mustard. The plates were piling up raw beef and Asparagus wrap, whole baby aubergines, seaweed, blocks of steamed spinach, it just kept coming.

It was time for another cold sake, this time it was the Masumi “Kuden Kantsukuri” 15% from Nagano, £17.50 and equally as good as the first. It didn’t last long.

Hot food can to be ordered from a separate card menu, the stunning prawn tempura was light and fluffy £4.75, the grilled eel and cucumber Temaki £4.75 was just fantastic as was the chicken Karaage and chilli baby squid. The deserts were equally as impressive mango and green tea mousse, raspberry mouse and daifuku, a traditional Japanese dish, a gel like mouthful of chocolate flavoured loveliness.

K10 mainly caters for the weekday city workers around Liverpool Street so shuts around 9.30pm and is closed at weekends. For those on the go there are competitively priced pre-prepared sushi and sashimi sets and a takeaway counter where freshly made hot food is available. They also do deliveries throughout the City and Canary Wharf and are happy to quote for corporate events and parties. Special offers are always available online and in house; the current £6.50 lunch deal is a real bargain.

There are few foods I would desire to eat everyday but Japanese is one of them. I never tire of its freshness, or its myriad of delicate and subtle flavours. It’s a big compliment to K10 that at the end of the evening our stack of empty plates was the highest in the whole restaurant, so high in fact, they photographed it for posterity!