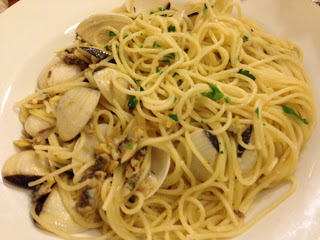 A few weeks ago I was fulminating about a spectacularly awful meal taken at The Artichoke in Croxley Green. How unfortunate for me then when I was about to go through a similar experience in the heaving seafood restaurant on Brighton sea front.

Entering The Regency and seeing the frenetic staff serving about one hundred and twenty people on a Saturday night would normally give one confidence in a place – Christ when will I learn that it means very little.

Better get straight down to it. I had the Moules Mariniere – how difficult is that? They were over salty and they had thrown in thick pieces of onion that were cheap and nasty. Are a few diced shallots that difficult to produce? Apparently so. My friend’s soggy calamari came with a tartar sauce that was so vinegary it made my face do funny contortions. Yuk. As for the bread, I didn’t know whether to put it in my mouth or take my make up off with it. Awful.

That sinking feeling is one with which I am very familiar and it didn’t desert me with the main course of spaghetti vongole. The pasta was a soggy, overcooked mess and had absolutely no flavour to it at all. I had to ask for olive oil and some Parmesan (oh stop being such snobs – I don’t give an Italian fig about seafood and (no) Parmesan.

This was washed down with a couple of glasses of the only rose on the menu – how sloppy is that? You have over a hundred covers and the choice of – well no, that’ll be zero choice if you want a bottle of pink.  A few conniptions later and I was ready to get the hell out of there. If this is the discerning British public I hold no hope in my heart for having bellies minded well in the UK. Deep sigh.