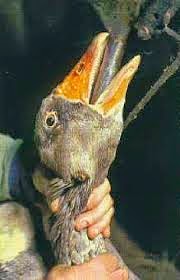 The feeding tube to force feed a geese
Let’s get this straight. If anyone were to witness the conditions under which veal is produced in France, or the way battery hens are kept, or the way some geese and ducks are force fed to produce livers ten times their normal size for our gastronomic pleasure, I’m sure many of us would leave ashen with guilt for allowing ourselves to turn a  blind eye to these ghastly methods.
Of course these days the majority of middle class peeps don’t buy anything other than free range eggs or buy British ‘rose’ veal, (although I’ve not cooked or had veal a dinner party for a decade). ensuring that humane methods are used to rear the animals.
Foie Gras stands on its own though – its buyers are a small percentage of the very well off who don’t give a hoot about the methods used to produce it. And then there’s the French…
The defence is that these days, many producers argue that the geese are reared naturally from anything up to six months before force feeding and that both ducks and geese have a natural capacity to store fat. Well, yes, but surely nature’s explanation is that they store fat for winter migrations??
I have just come back from Spain and learned about a producer, Eduardo de Sousa, whose farm affords the geese a rather splendid diet of acorns, figs and various exotic herbs whose seeds give the yellow colour that is normally produced by the force feeding of corn.
The birds are allowed to eat as much as they can and the resultant liver is nearly seven times as big. Purists, of course, argue that foie gras isn’t foie gras unless it comes from an animal that has been force fed, but I am glad to say that for many of us, this is a most barbaric method, although sadly the French and their views on gastronomic purity and culture outweigh any argument on the grounds of humane treatment and welfare of live stock.
I’m ashamed to say that I used to guzzle (please note the past tense)  this fantastically wonderful tasting liver without a thought when I was living in France. I’m afraid for those who indulge, it continues to be one of the finest tastes on the planet and for that reason alone, is here to stay.