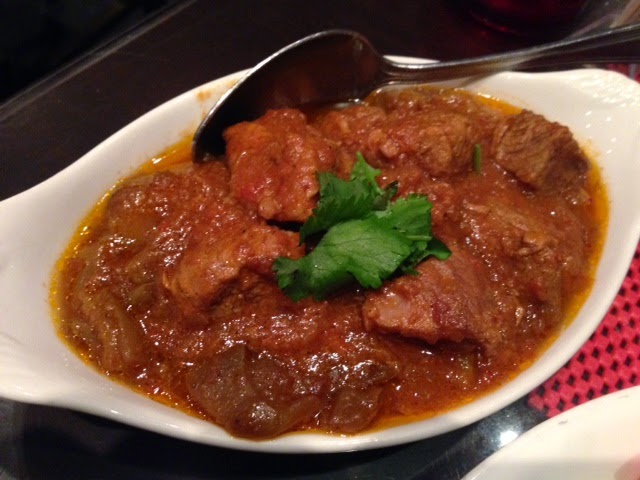 It had been raining incessantly for two days. The pavements were glistening, saturated, unable to soak up anymore; the surface water ran into the gutter and burbled down the storm drains. The North London streets were heavy with the melancholia that pervades the ‘80s film “Trouble in Mind” or night time New York streets of “Taxi Driver”, but this was Kilburn on a Tuesday Night and I was off to eat Afghan food.
Hurrying from the car, the restaurant was a warm, welcoming refuge from the cold and damp, the alluring aroma of baking bread filling the air. A charming waitress with a beguiling smile delivered the menus and informed us that it was BYO with NO, repeat NO corkage charge. I popped out again to the shop next door and not blessed with a huge choice, I returned with a couple of bottles of perfectly acceptable Australian Yellow Tail which, I thought would go perfectly with the lamb. Incidentally there is also an Aldi supermarket further up the High Road which does some superb wines for bargain prices.
While waiting for the food and I gazed out the window through the rain the waitress in the empty Speedy Noodles across the road that appeared to be having a party all to herself singing and dancing her way around the cheap and cheerful Chinese café across Kilburn High Road.
My main course was chicken and lamb skewers, one of each cooked on a charcoal grill served with a generous salad and brown basmati rice. (£11.00) Both were deeply succulent and lightly spiced, the fragrant rice adding a superb complimentary nuttiness to dish. My companion had the Bamiya Chalow, Sautéed okra with pieces of lamb served with white rice and salad. (£8.00). A lovely dish bursting with meet and okra.
Side vegetables were two of my favourites – aubergine and chick peas both served in a rich, tasty tomato sauce. (£7.00 each) The juices all mopped up with a bottomless supply of amazing fresh baked Afghan bread.
While eating my eyes were drawn to a striking framed poster on the wall of an Afghan Girl with green eyes. I asked the waitress what the story was. The subject of the photograph was called “the Afghan Girl” shot by journalist Steve McCurry, was Sharbat Gula, an Afghan woman who was living as a refugee in Pakistan during the time of the Soviet occupation of Afghanistan when she was photographed. The image brought her recognition when it was featured on the cover of the June 1985 issue of National Geographic Magazine at a time when she was approximately 12 years old. The Afghans, despite the country having been at war for most of the last 35 years or so are so immensely proud of their country and culture and she seemed genuinely pleased that I had asked. You can learn about more than just food when you eat out for a living; I always stay curious.
Overall the food, pricing and service were excellent so it’s no wonder the place was so busy on a Tuesday night. Popular with both Kilburnites and teachers for the nearby school, it gets even busier at the weekend so it’s always best to book. If your feeling adventurous and flush they also have a branch in New York too.
It was still raining when we left and the girl in Speedy Noodles was still dancing and singing to herself. Couldn’t help wondering whatever happened to the Afghan girl with green eyes in the photo, but I’ll be back to learn more about Afghanistan and its food.
Ariana II
241 Kilburn High Road
London
NW6 7JN
0203 490 6709
http://ariana2restaurant.co.uk
@ariana2kilburn