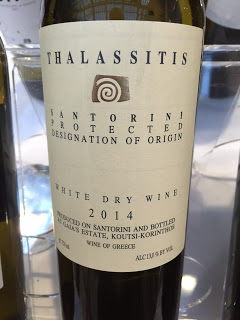 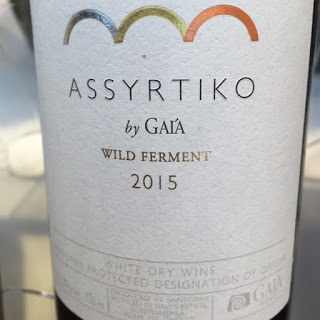 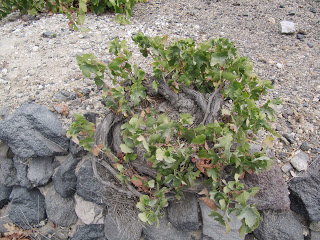 The great pleasure of being a wine journalist is that one gets invited to a surfeit of tastings. Early spring is when many of the big wholesalers and distributors launch their new annual wine lists to the trade. The new 2016 collection of Hallgarten Druitt and Novum wines at the Royal Horticultural Halls in Victoria is a major event in any sommelier’s calendar, with over 700 wines on display from around the world, it’s an oenophiles delight.
I began my tour systematically by perusing and tasting some Champagnes before moving on to Sancerre and some superb wines from the Loire Valley. Fortuitously, after only a few tables, I ran into the company’s Master of Wine, Beverly Tabbron. I thought to myself, rather than continue trying wines from regions I already knew well, asked if she could recommend something new and different to try.  She led me to a table of Greek wines and insisted that I try two wines produced on the Greek Island of Santorini.
Gaia is one of the oldest continuously cultivated vineyards in the world and produces some fantastic wines from local grapes; both of these wines are made from the same grape varietal by different methods.
Thalassitis Santorini P.D.O., Dry White
In Antiquity, mixing wine with sea (“Thalassa” in Greek) water was a very well known practice applied to give therapeutic virtues to wine. The wines resulting from this process were called “Thalassitis Oenos” (sea-originated wine).
Thalassitis is produced from Santorini’s indigenous white grape variety, Assyrtiko. The grapes are grown on 80 year old vines on slopes facing the sea in their vineyards in Episkopi, Akrotiri and Pyrgos regions. The ripening grapes are gently kissed by the spray of the deeply turquoise Aegean Sea giving it a hint of brine on the palate forming the special character of this gorgeous wine. The volcanic terroir gives the wine a distinct minerality.
The vines are trained to grow in a circular shape to protect the grapes from the searing heat of the Greek summer sun the sea breeze helps cool the vines from the strong winds and the searing hot sun of the Mediterranean summer. It is, perhaps, the only variety in the Mediterranean that manages to combine full maturity of grapes with considerably high acidity, despite the climatic conditions of the Island.
This is a bone dry wine; full-bodied, balanced and well-structured with a crisp acidity, notes of lemon and green apple, distinctive minerality. It’s the delicate honeysuckle aromas along with that distinctive caress of the sea that makes this wine so special. Serve well chilled with fish, crustaceans or other seafood. Simply divine!
Assyrtiko Wild Ferment Santorini P.D.O.
My second recommendation is from the same grapes but produced by a different method. The Assyrtiko grape from the upland vineyard of Pyrgos is more aromatic than the Assyrtiko from the other parts of Santorini Island and these are used in this special wine.
According to Gaia Wines:
“After undergoing the 12-hour skin contact process at around 10οC, the grape must is placed in small 1.000 litre INOX tanks and in new 225lt French and American oak barrels and acacia barrels. The temperature is then allowed to rise naturally, without any further involvement. From that point on, modern technology passes the baton to traditional winemaking. Fermentation develops on its own at a gradual pace. The wild yeast strains that prevail are the ones which eventually determine the wine’s character. In every tank and barrel something different occurs. After the end of the fermentation, we choose only those tanks and barrels which, according to our expertise, raise the Assyrtiko to new levels of enjoyment.”
This delightful wine has slight citrus aroma and crisp acidity combined with elegant oak notes of toast and biscuit resulting from 4 months on the lees; rich in the mouth, complex and labyrinthine with notes of honey, intense minerality and a long finish.
Enjoy this wine, well chilled with seafood, fatty fish; lamb and poultry. Drink young for its peak dryness and minerality. After 2-3 years its mineral dimension will subside while the fruity and honey flavours will become more prominent.
http://www.gaia-wines.gr
https://www.facebook.com/Gaia-Wines-141496015956804/
@GaiaWines
UK distribution by:
Hallgarten Druitt
http://www.hdnwines.co.uk