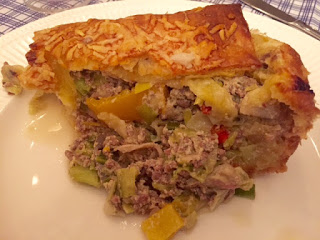 Dutch cuisine generally has a bad press, largely from those who’ve either never been there or bothered to explore its rich diversity. Certainly some of the dishes tend to be dense and carb heavy, a reflection of the Dutch lifestyle. After all, it’s a nation historically built on heavy farm labour with cold winters in a hill-less countryside harshly caressed by the cutting icy winds from the North Sea. However, one shouldn’t also neglect its rich seafood culture dominated by cod, herring and eels prepared in a variety of delicious ways.

Returning to my mother’s country always brings a kaleidoscope of childhood memories. A few days before I leave, vivid dreams, reveries and flashbacks fill my days and nights. I recall my grand parent’s house, the whitewashed Beetzlaan, the old farmers cottage with a vertiginous twisting staircase in the small town of Soestdijk in central Holland. It’s my olfactory memories that are foremost; as I close my eyes and remember, I can still recall my grandmother’ cooking; the sweet, earthy aroma of beetroot slowly stewing on their wood burning stove mixed with smell of brewing coffee pervading the house.

Spending time with my Dutch family is always a pleasure and on a recent visit I cooked this traditional Dutch dish for a big family meal at my cousin’s house. This very same recipe was cooked my grandmother, my mother and my aunt and now has been passed on to me. Winter is the season for leeks in Holland, you see farmers trucks laden with leeks passing though the country lanes, while supermarkets build towering displays of this rather wonderful vegetable.

TIP You can also use beef mince instead.

Begin by frying the slices of bacon in butter until cooked through. Remove bacon with a slotted spoon and set aside.

Next fry the minced meat in the bacon and butter juice, adding a little salt and pepper. Stir until browned and cooked through.

Repalce the bacon and all the vegetables. Cook on a medium heat for 15 minutes, stirring frequently. Lower the heat, cover and simmer for a further 10 minutes.

Butter a glass baking dish and line with a sheet of pastry.

Into another bowl crack 3 eggs, add 150g of cream cheese, mix with a whisk or hand blender then add to your meat and leak mix, stir in and cook for a further 5 minutes.

Spoon the mix over the pastry base. Spread evenly and cover with another pastry sheet and finally sprinkle over the cheese.

If you are making the pork version, then a crisp, dry white balances well with the more fatty pork. I matched a lovely French Charette Muscat Viognier 2014 blend from Aldi Netherlands a steal at €3.59.

This is a warming, hearty dish that is great to share with friends or family. It always leaves me with a warm glow, and will forever remind me of my childhood in Holland.