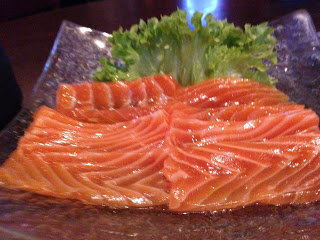 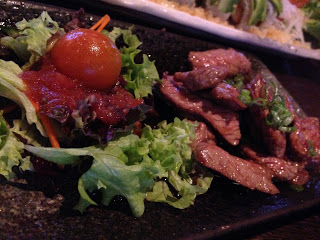 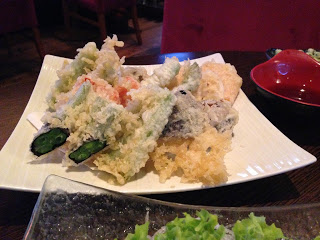 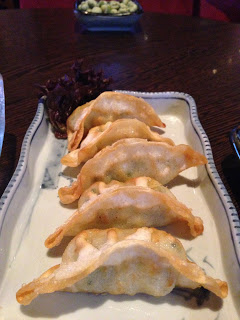 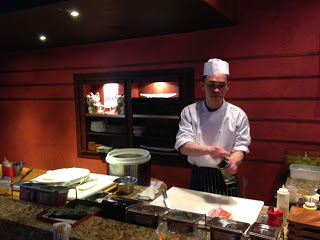 Unable to resist a bargain and a lover of Japanese food, I had to take up a Groupon deal for two in Maki, a rather handsome looking restaurant with an open kitchen and a warm setting in suburban Richmond.

For those of you who aren’t familiar with this cuisine, for me it’s the most clean tasting food that requires a tremendous amount of skill. It’s also rather pricey but so utterly worth every penny when executed well. So, £17 for two courses for two people was going to be an absolute snip.

Menus were accompanied by smiling staff, always a bonus these days. We ordered a range of dishes for sharing; salmon sashimi with ponzu dressing, vegetable tempura, chicken gyoza and sirloin steak teryaki. I have to say I wasn’t impressed with the wine list. It was dull and frankly sloppy. I ordered a bottle of Picpoul which is normally quite reliable and some saki for my companion.

When the salmon arrived, however, I would have forgiven Bull’s Blood being on the menu were it featured; meltingly soft, spankingly fresh, lying in a pool of a zesty, ponzu sauce.

Next came the tempura; the lightest battered vegetables served with a delicate sauce. I particularly liked the asparagus which was wrapped in seaweed. The coating was so light it was almost translucent.

At this point I have to say that all the dipping sauces were delicious and beautifully balanced and as a huge fan of pickled ginger, I was given a massive pile of the stuff on request.

The gyoza were full of moist, well seasoned chicken and I could have cut the steak with a spoon it was so tender.

Maki smacks of class. It’s understated, the staff are a joy, the food is first class and the interior a real pleasure to behold. If the Groupon deal is still on, I urge you to book a table and savour the finest Japanese cuisine in West London. Go anyway. Now, about the wine list…..