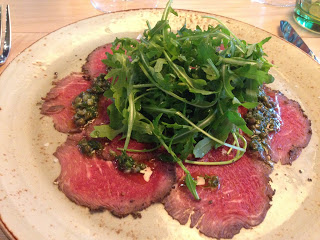 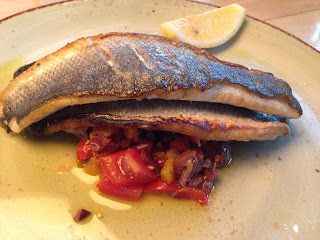 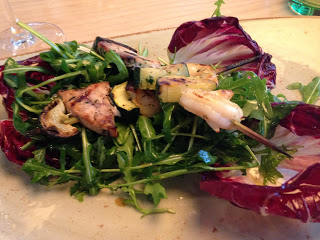 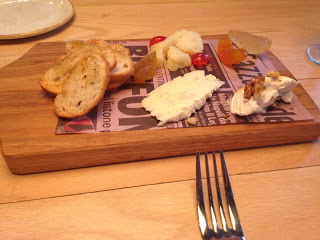 I love Liverpool, largely because one of my closest friends with whom I went to uni is a scouser  and so I’ve also got to know some terrific people. Witty, generous and many of whom enjoy a night out chewing the fat over good food and wine.

And so, on the recommendation of a friend, three of us decided to go to Gino D’Acampo’s sprawling restaurant in Castle Street.

As you can imagine, it’s a sleek affair. Upon entering you’re handed a glass of Prosecco and we were led to the bar whilst our table was getting ready.

Our wait was a tad longer as the rain had brought in some customers. They obligingly kept filling our glasses until we were ready to eat. Nice touch.

The seating and surroundings at Gino’s are uber modern, chic and extremely comfortable and as I get older I realise my bottom needs decent padding so this made me very happy.

My companions decided to choose from the set menu, a rather modest £16 a head. They both fancied the pate followed by the bass, simply served on a bed of salsa.

As a lover of rare or raw beef I chose the carpaccio (£10)  and followed it with a seafood skewer of prawns, scallops and swordfish (£17). I was immensely pleased with Greco di Tufo being on the wine menu, a particular favourite of mine (£33).

Let’s start with the good shall we? The very good in fact. The pate was a complete triumph of flavour and texture. Terrific ciabatta onto which the velvety pate was piled and there was plenty of it.

My carpaccio, (after asking for some Parmesan – why not, that’s how I like it) was meltingly soft although a bit mean in size.

Unlike the bass, however, which came on an incredibly generous plate of two fillets with a delicious and simple salsa. Don’t mess with fish is the conclusion every time.

Sadly the skewer was pretty much a titanic disaster. Lacking in substance didn’t even begin to describe what I was presented with and the fish was totally overcooked. The two prawns and a couple of scallops were placed on what I can only describe as a forest of greenery.

The manageress, however, was very professional and it was immediately taken off the bill, as was the cheese board. The cheese was beautiful, I just felt royally robbed, the portion was so tiny.

Not wishing to finish on a sour note, the wine made my soul sing and the waiting staff were smiley, professional and looked as though they wanted to be there.

Overall for a chain there was a lot more to praise than to criticise. I’d happily go back again and that, at the end of the day is what a restaurant needs to hear.